Plan your holiday
Enjoy our blog packed with exciting and fun ideas to fill your days.
From Lockdown to Luxury.
Discover the glorious colours of a Cornish spring break
Take a virtual walk in the sand via our beach webcams.

Most Haunted Places in Cornwall

As darkness falls across Cornwall and Halloween edges closer, tales of ghosts and ghouls emerge from all quarters. Cornwall is a county infused with myth and legend, but this reaches a paranormal peak at this time of year. To celebrate the spooky season whae visit some of the most haunted places in Cornwall.

Located in a lonely spot in the middle of windswept Bodmin Moor, Jamaica Inn is reputed to be one of the most haunted places in the country. It has served as a coaching inn for centuries and is renowned for tales of smuggling, murder and mystery – accentuated by Daphne du Maurier’s famous novel about the inn.

Landlords and guests have experienced many spooky goings-on at Jamaica Inn, which is said to be haunted by a ragtag of ghosts including a murdered highwayman in a tricorn hat and cloak who is seen to drift through solid doors. Ghostly incidents are so common that popular TV programme Most Haunted said the episode they recorded at Jamaica Inn was the spookiest ever. Visitors can learn more about the inn’s colourful history in the museum or ‘sleep with the ghosts’ by staying overnight in the hotel.

As one of Cornwall’s oldest buildings and the site of many a battle, it’s little wonder that ghosts are said to roam Pendennis Castle. This fortress stands guard at the mouth of the Fal Estuary, near Falmouth and was built during the reign of Henry VIII to protect the port from invasion. During the English Civil War, Pendennis was the last Royalist stronghold to fall after a six-month siege in which many people died.

At Halloween time guests are invited to join an eerie evening tour to learn all about dark deeds and ghostly apparitions which haunt the castle to this day. The castle is said to be haunted by at least eight different ghosts, including the screams of a kitchen maid who fell to her death and the footsteps of soldiers on narrow staircases.

Bodmin Jail is a cold and foreboding place famous for its dark and sinister past when murderers, smugglers and thieves were locked up in dank dungeons. Some seriously sinister characters were detained here and public hangings were held at the jail up until 1909. Considered to be one of Britain’s most haunted places, Bodmin Jail’s notorious ghosts include that of Selina Wadge who was hung for the murder of her child. Children have reported seeing a lady in a long dress crying and pregnant women have been known to become very emotional in the ‘presence’ of this spirit.

The jail is now a museum where brave visitors can descend into the bowels of this dark prison and learn about the lives of its inmates. Gruesome exhibits include the Execution Pit which features a restored hanging ‘long drop’ platform. Bodmin Jail hosts regular Overnight Ghost Walks where visitors get time to soak up the spooky atmosphere and attend various workshops on paranormal activity.

Cornwall’s mines were dark and dangerous places, where terrifying accidents led to many deaths below ground. Wheal Coates Mine on the cliff at Chapel Porth, Near St Agnes, is said to be haunted by the ghosts of dead miners. Today visitors can see the ruins of the cliff top engine house which casts an eerie shadow over the rugged coastal scenery.

On a cold and windy day, when the spot is deserted, some visitors have said they have heard spooky whispers, perhaps exasperated by the crashing waves which echo up through the mines and rattle the grate in the floor of this ghostly ruin. 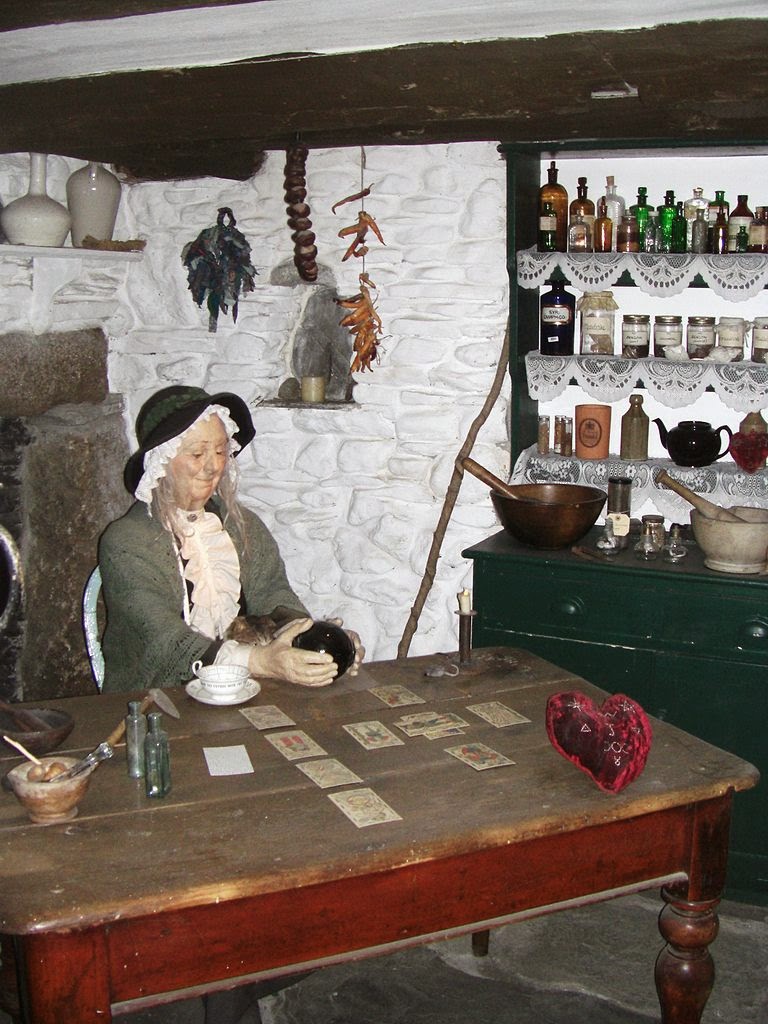 This museum may not be haunted, as far as we know, but it’s definitely a particularly spooky visitor attraction. The Museum of Witchcraft has been located in Boscastle for over half a century and houses the world’s largest collection of artefacts related to witchcraft. When visitors step through the door, adorned with a picture of a witch, they are confronted with eerie exhibits of the occult which send shivers down the spine.

Visitors can navigate their way through the packed rooms with sections devoted to the Wiccan wheel of the year, ritual magic, divination, stone circles and protective charms. There is also a small section on Satanism containing a medallion given to the museum by the Church of Satan. Despite its scary subject matter, the Museum of Witchcraft is very popular with visitors especially at Halloween.

Enjoy a Spooky Stay in Cornwall

Visitors looking for a break in Cornwall at Halloween time should check out the holiday cottages, houses and apartments which offer a safe retreat from the spooky and scary attractions on this list. Visit carbisbayholidays.co.uk to find available holiday properties.